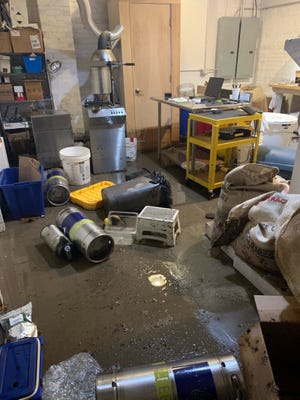 A week after a series of thunderstorms dropped 4 to 6 inches of rain in the Bloomington area, downtown businesses that were inundated by the flooding are still working to clean up.

The waters rose to Hopscotch Coffee Roastery and Bloomingfoods Near West along North Madison Avenue.

Phil Phillipy, managing director of Bloomingfoods, received a phone call from the night baker at the Near West store on Friday, June 18, letting him know that water was entering the store’s basement. He rushed to the store at 316 W. Sixth St., to find 10 to 12 inches of water in the basement and 6 to 8 inches in the administrative offices.

“We had a lot of problems,” Phillipy said Friday morning, nearly a week after the floods. “All the water was out at 2 a.m.”

Fans, a larger fan, a shop vacuum and dehumidifiers have been put in place to help dry out the affected areas. On Monday morning, a service specializing in flood and mold mitigation began working to help clean the basement and offices.

“They came in and drilled test holes in the drywall,” Phillipy said. The carpet in the conference room was put back up and everything was disinfected. “We lost electronic equipment and computers on the ground. But we were able to do business.”

The actual portion of the store’s groceries was unaffected by the flooding, Phillipy said, adding that the flash flood was worse than that of 2008.

“This sixth to seventh block on Madison, it’s flooded and the storm sewers can’t keep up,” he said. “I went out to make sure the storm drain was clear and clear. This water was up to my waist,” he said, estimating she was 36 inches depth.

Jeff Grant, owner of Hopscotch Coffee Roastery, got a call early Saturday morning from Phillipy, who was fighting the flooding next to Bloomingfoods.

Grant arrived at the cafe at 2 a.m. on Saturday and said the flood waters had already rushed in, but it was evident that there had been between 18 inches and 2 feet of water inside.

“This is where we stored all of the coffee, in 150-pound bags,” Grant said. “All of that stuff was overwhelmed and ruined.… It was all in there. Stuff that we keep in the back of the store that we found in front of the store. It was very surreal.”

A refrigerator and other equipment were destroyed. A large chest gel was completely knocked over. Grant hopes the roaster will dry out and be usable. But for now, Hopscotch is reaching out to roasters in Louisville to purchase coffee.

“We already had five or six days of roasted coffee,” Grant said.

Everything is fine at the cafe on Dodds Street, he said. But he doesn’t know when the Madison Street store will reopen.

“We’re on a lower level there,” he said of the 212 N. Madison St. store. “There’s no great storm drainage there,” he said. he noted, adding that he had filed reports with the city in the past and that “nothing had been done”.

Grant said he hired Service Master, who installed dehumidifiers and fans for a few days. Now he’s trying to figure out if they need to remove the drywall to prevent mold from growing.

“We’re still evaluating,” he said, adding that he hopes the Madison Street store won’t be closed for more than a few weeks. “But I have no idea.”

Grant said anyone who wants to donate to Hopscotch to help with the cleanup and loss of income can do so on the store’s website. He is also grateful for the help his fellow roasters and others have already given.

On the other side of the city center, some businesses were completely inundated while others remained dry. Bob Costello, owner of Soma Kirkwood Cafe and Village Deli, said that although Soma is in a basement, it was dry while Village Deli had over 6 feet of water in the basement.

“I’m a little baffled,” Costello said Friday afternoon, taking a break from his work at the deli. “The church across the street (from Soma) suffered a lot of damage. And Village Deli was flooded.”

Breakdowns are also a problem:Severe storms cause flooding and power outages

When Costello arrived early Saturday morning, the cold room located at the back of the grocery store at 409 E. Kirkwood Ave. was no longer attached to the building. He believes the floodwaters pulled him out, allowing water to spill into the building and make its way to the basement.

“We have a sump pump there, but it couldn’t keep up with the volume of water,” Costello said.

When rental stores opened on Saturday morning, Costello asked people to pick up pumps and a pool company brought them two more pumps. By 2:30 p.m. Saturday, all water had been pumped to the city’s storm sewers.

“The office was completely destroyed,” Costello said. “Everything was taken out of the basement and now we are rebuilding.

“The dining room had about 1 to 2 inches of water,” he said. “We removed all the wet drywall. We drained all the water and dried it all.”

Now they’re replacing drywall, painting, installing new ductwork and carpeting, which is expensive, especially since Costello had no flood insurance. “We have flood insurance now,” he said. “It will take effect in 30 days. We bought it the next day.

To add to the problems that Village Deli faced last week, Duke Energy cut power along Kirkwood Avenue on Sunday night when a transformer blew up. This left the cold room without power – all the food was lost.

Even with all the devastation, Costello spoke positively about the “Kirkwood community,” which he said has been so helpful to each other, moving equipment to nearby stores and helping with cleanup efforts.

“It was just such a great community spirit the next day,” he said. “That’s what to love about Bloomington.”

The waters that flooded the basement of the grocery store flowed like a river through some nearby businesses along East Kirkwood. This has happened both at Nick’s English Hut and nearby Osteria Rago, according to Ian Fletcher, general manager and chef of the Italian restaurant.

On Friday night and early Saturday, there was 4 to 5 inches of water all over the floor in Osteria Rago’s dining room, Fletcher said. Fortunately, the main kitchen remained dry.

Fletcher arrived around 12:30 am Saturday and worked four hours “pushing water out the front door”.

The employees arrived on Saturday morning and a major cleanup effort began, everything from baseboards to be cleaned and disinfected. “We cleaned for about 10 hours,” Fletcher said. At 4 p.m. Osteria Rago was able to open.

“We were lucky enough with this,” Fletcher said, adding that the restaurant keeps most food items and computer equipment at least 6 to 12 inches off the ground.

Some problems associated with the flooding continued on Saturday evening and Sunday this weekend when the transformation outside the restaurant caught fire.

Nick’s and Osteria Rago both lost the recycling bins and the bins that were in the alley. Co-owner Susan Bright said she thought she saw one of the restaurant blue bins when she was cycling south near Switchyard Park. She credits the flagstone flooring in Osteria Rago’s restaurant for helping to keep the floodwaters from doing more damage.

The nearby Pizzaria cafe also suffered from flooding, but after a deep clean on Friday night and early Saturday, the pizzeria was able to open on Saturday.

Across the street, the Monroe County Public Library suffered flooding along Grant Street, according to director Josh Wolf. Wolf and others’ swift response prevented the floodwaters from spreading further inland. At the height of the flooding, Wolf said there were a few feet of water outside the library’s Grant Street entrance and water was entering the basements. but no books were affected.

Wolf said the Ellettsville branch had more serious problems due to the flash flood, with a power failure causing the lights to go out and the internal fire door to fall.