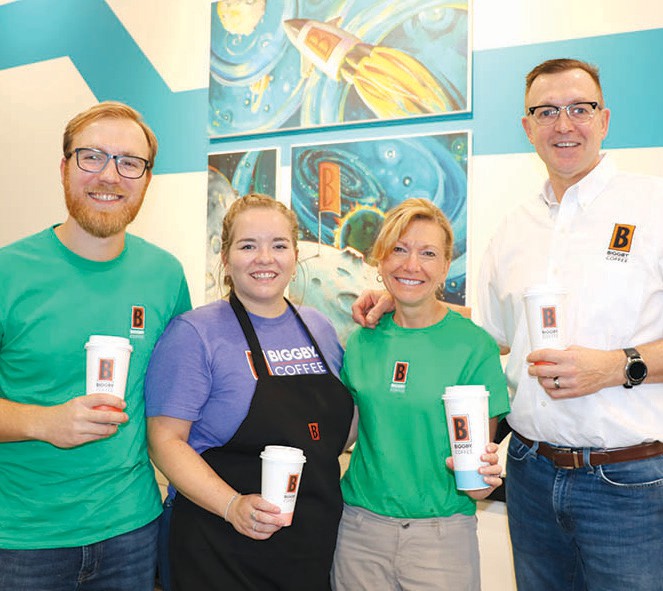 The love of quality coffee runs in the Raubinger family.

When husband-and-wife team Zachary and Reagan Raubinger opened their Biggby Coffee franchise in White Lake last week, they carried on a family legacy started by Zach’s father 16 years ago.

You could say that coffee is in the blood of the Raubinger family. Zach started working at his father’s Biggby Coffee store at the age of 11 and his entrepreneurial spirit was born when he fell in love with the concept of gourmet coffee. Zach, who still works full time at Ford Motor Company in IT, decided to follow the Raubinger family path with Reagan and open their own Biggby Coffee in White Lake.

The location officially opened at the corner of Fisk Road and M-59 last Tuesday. Customers who brought non-perishable food to Open Door Outreach Center received $ 1 off any beverage. Other special opening events took place throughout the week, culminating with an official groundbreaking ceremony with the Lake District Chamber of Commerce on Friday.

Zach’s father, Phillip, opened his Howell Biggby Coffee store in 2006. After deciding to go into business with his sister and brother-in-law, he began researching coffee franchises before turning to Beaner’s Gourmet. Coffee, the leading coffee retailer based in Lansing. .

“We moved on to something called a Discovery Day, investigated more and decided this was the brand we wanted to go with,” said Philip. “We were impressed, we liked the product. They had a very large store population in Lansing. If you went to MSU, you knew Beaner. It was very popular in Lansing, but there was only one store east of Lansing. There was a store in Brighton and that was it.

Philip opened the Howell store in January 2006. In 2008, Beaner’s Gourmet Coffee rebranded itself as Biggby Coffee after concerns that Beaner’s name might inadvertently represent an ethnic insult.

The White Lake location is in a former Chase Bank. The building has been completely renovated and divided into two commercial spaces. The space next to Biggby remains empty, but there has been a lot of interest and it should be full soon.

To accommodate Biggby, the over 1,800 square foot space has been remodeled to include a drive-thru window. The interior also features seating for 26, a living room with a fireplace, and a bookable meeting room, which was once the original meeting room for the Chase Bank.

Zach and Reagan are excited to caffeinate the community of White Lake. With Philip and his wife Teresa as partners, Reagan will run the cafe while Zach will lead the behind-the-scenes operations as he continues to work full-time at Ford.

So what do they recommend? For Zach, “it depends on the season. In winter, it’s a Winter Wonderland which is white chocolate and cinnamon. Philip prefers a Red Eye, which is coffee and espresso. During the fall season, however, he recommends a Hot Caramel Apple Cider or Chumpkin Latte, with chi and pumpkin.

The White Lake location is looking for additional team members to join its staff. For more information or to apply, visit their Facebook page or biggby.com/job-listings. They are located at 9228 Highland Road in White Lake. The opening hours are Monday to Saturday from 6 a.m. to 8 p.m. and Sunday from 7 a.m. to 8 p.m.